Romans 1:1-17- A Reading and Study Questions- Greeting, A Longing to Visit Rome, and The Righteous Shall Live by Faith

Today, we are reading God’s word.

Why are we reading Romans?

Because it is my jam! Actually, because many consider this to be the greatest literary works of all time. It lays out the Gospel, salvation, and God’s love to ALL people who come to Him. It helped me tremendously as I tend to want to be an overachiever, depend on works for worth, and have a past of believing that is how you gain God’s favor. But Romans says otherwise. Our salvation comes from what He has already done for us, not what we will ever do. We must die in the flesh, accept His gift of Grace and be reborn in the spirit of Jesus Christ. That is Romans and it is amazing.

As we begin reading the book of Romans, it is good to know some backstory- Who wrote it? Why? When? Who for? Why is it special?

was a man chosen by God to explain the Gospel of Jesus Christ to the world. He was an unlikely pick and a testament to God’s grace and how He pursues us. His radical transformation from a Christian persecutor to who many consider being the patriarch of the Christian faith was shocking and beautiful. It symbolizes all of our hope. As Paul writes in many of his letters, in summary, if ‘this sinner (referring to himself) can overcome and be born again in Christ we all have hope in Christ.’

The letter of Romans was written by Paul to the church in Rome about 57 A.D. He wrote to them to let them know he was on his way and to apologize for not coming sooner. He also wrote this not knowing if he would make it there alive, as his ministry of bringing Christ to the world was very dangerous, something we so take for granted.

This was written to help clear up and bring the full Gospel to those disputing the justification and mercy of Christ to all believers and not just those who first kept Jewish law. At this time, there were still a lot of Jewish Christians who insisted that Gentiles who wanted to become Christians must become Jewish in their customs first before being saved by Christ.

The main point of Romans is Paul bringing the heat- He teaches that it is not by law or works that we are saved. It is not by what WE do, but by what GOD DID for us that saves us. We are justified solely because of Christ amazing gift of grace to forgive our sins. We were never expected to be perfect as God’s law is an expression of Him and therefore perfect. Our works are impossible in saving us because we are not perfect as only God is. We are expected to accept our imperfection, recognize our sin, accept His gift of grace, rely on Him through faith, and because of this our works become an expression of our love and knowledge of what He and only He could do. Law, nor works save us or make us Christian.

He explains who he is and who he is in Christ. He is an apostle of God on a mission to bring the Gospel of Jesus Christ.

He then explains his desire to visit Rome and why. He wants to bless them with spiritual gifts and in turn, be mutually encouraged by each other’s faith. He plans to bring the Gospel to all, Jews and Gentiles alike.

Then he explains the intent of the letter- the power of God’s Salvation to everyone who believes. Faith.

1Paul, a servant of Christ Jesus, called to be an apostle, set apart for the gospel of God, 2which he promised beforehand through his prophets in the holy Scriptures, 3concerning his Son, who was descended from David according to the flesh 4and was declared to be the Son of God in power according to the Spirit of holiness by his resurrection from the dead, Jesus Christ our Lord, 5through whom we have received grace and apostleship to bring about the obedience of faith for the sake of his name among all the nations, 6including you who are called to belong to Jesus Christ,

7To all those in Rome who are loved by God and called to be saints:

Grace to you and peace from God our Father and the Lord Jesus Christ.

Longing to Go to Rome

8First, I thank my God through Jesus Christ for all of you, because your faith is proclaimed in all the world. 9For God is my witness, whom I serve with my spirit in the gospel of his Son, that without ceasing I mention you 10always in my prayers, asking that somehow by God’s will I may now at last succeed in coming to you. 11For I long to see you, that I may impart to you some spiritual gift to strengthen you— 12that is, that we may be mutually encouraged by each other’s faith, both yours and mine. 13I do not want you to be unaware, brothers, that I have often intended to come to you (but thus far have been prevented), in order that I may reap some harvest among you as well as among the rest of the Gentiles. 14I am under obligation both to Greeks and to barbarians, both to the wise and to the foolish. 15So I am eager to preach the gospel to you also who are in Rome.

The Righteous Shall Live by Faith

16For I am not ashamed of the gospel, for it is the power of God for salvation to everyone who believes, to the Jew first and also to the Greek. 17For in it the righteousness of God is revealed from faith for faith, as it is written, “The righteous shall live by faith.”

The same Greek word translates into English as righteous, just, or justice. The Jewish readers whom Paul was writing would have interpreted the phrase, “the righteousness of God” as God’s own faithfulness to his promises to Isreal, His covenant. By keeping His word He shows His righteousness, justice, and trustworthiness. This all ties back to the Jewish courts at the time. Being righteous was not a moral judgment, but rather to be found right as a result of the judge’s decision. ~ More on this in future readings.

2. How are we hesitant about the ‘good news’ in our lives? In our society?

3. How does Paul address the divisions in the church of Rome in this first passage? How is division presented today in the church and how does this passage apply? 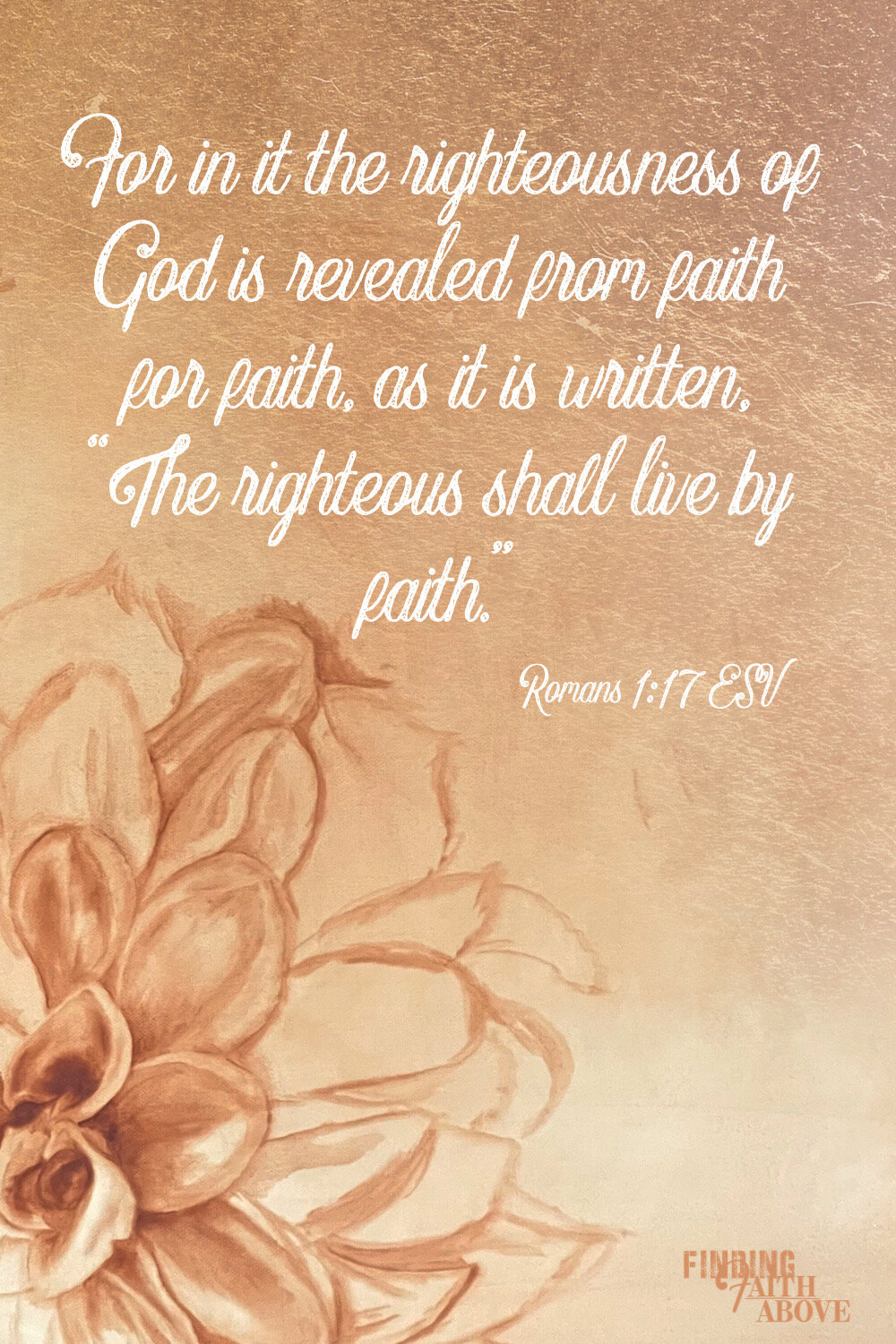 Resources used in this study:

Does Being a Christian Jive with Self-Help? What Does the Bible Say About Self-Help? How to Tackle Self-Help and Allow for God’s Will. »